Funny, it feels like I’ve written about exactly this topic before…

I got rejected today, academically speaking*. Again. I was actually pretty surprised at how

nonplussed I was about the whole thing. I’ve gotten mostly immune to the being rejected- at least for grant proposals and paper submissions. It certainly could be a function of my current mid-career, fairly stable status as a scientist. That tends to lend you a lot of buffer to deal with the frequent, inevitable, and variably-sized rejections that come as part of the job. However, I’ve also got a few ideas about advice to deal with rejection (some of which I’ve shared previously).

I’m not saying you (or I) can do all of these in a short time. This process can take time- and sometimes distance. And, yes, I do realize that some of this advice is a little in the vein of the famous Stuart Smalley. But, gosh darn it, you ARE smart enough. 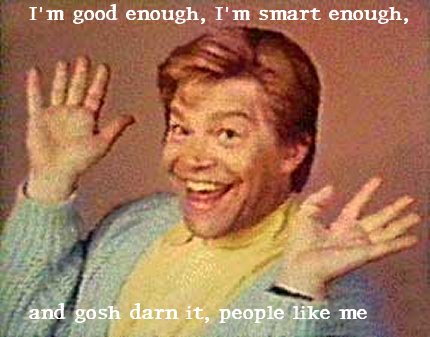 *For those interested, I submitted an R01 proposal to the NIH last February. It was reviewed at the NIH study section on Monday and Tuesday. The results of this review were updated in the NIH submission/tracking system, eRA commons, just this morning. I won’t know why the proposal was ‘not discussed’ for probably a week or so, when they post the summary of reviewers’ written comments. But for now I know that it was not discussed at the section and thus will not be funded.

At this point I’ve submitted something like 8 R01-level proposals as a PI or co-PI. I’ve been ‘Not Discussed’ on 7 of those. On the eight I got a score, but it was pretty much the lowest score you can get. Given that NIH pay lines are something around 10% I figure that one of the next 2 proposals I submit will be funded. Right? But I’ve been successful with internal funding, collaborations, and working on large center projects that have come to the lab- so I really can’t complain.

3 thoughts on “Dealing with Academic Rejection”