This comic is an homage to my time in graduate school- stimulating and frustrating, a time for development, exploration, and maturation. Pretty much 5 years for me. It’s not strictly autobiographical, though it certainly contains elements from my experience (and my foibles). There were plenty of ways to waste time. On the other hand, if you consider your time as ‘productive’ only when you have your nose to the grindstone you will not end up learning much. Here are some of the things that I didn’t include:

Graduate school was a great time and one with a lot of freedom that came with the stress. I was lucky to have a great advisor who supported me even when he thought I was goofing off (he did not support me IN the goofing off- he supported me in my career despite that I was goofing off) and a bunch of great friends who I still keep in touch with. There was so much potential in that time- the potential is still there in my career, I just need to take more time to recognize it. And maybe score some more free food too. 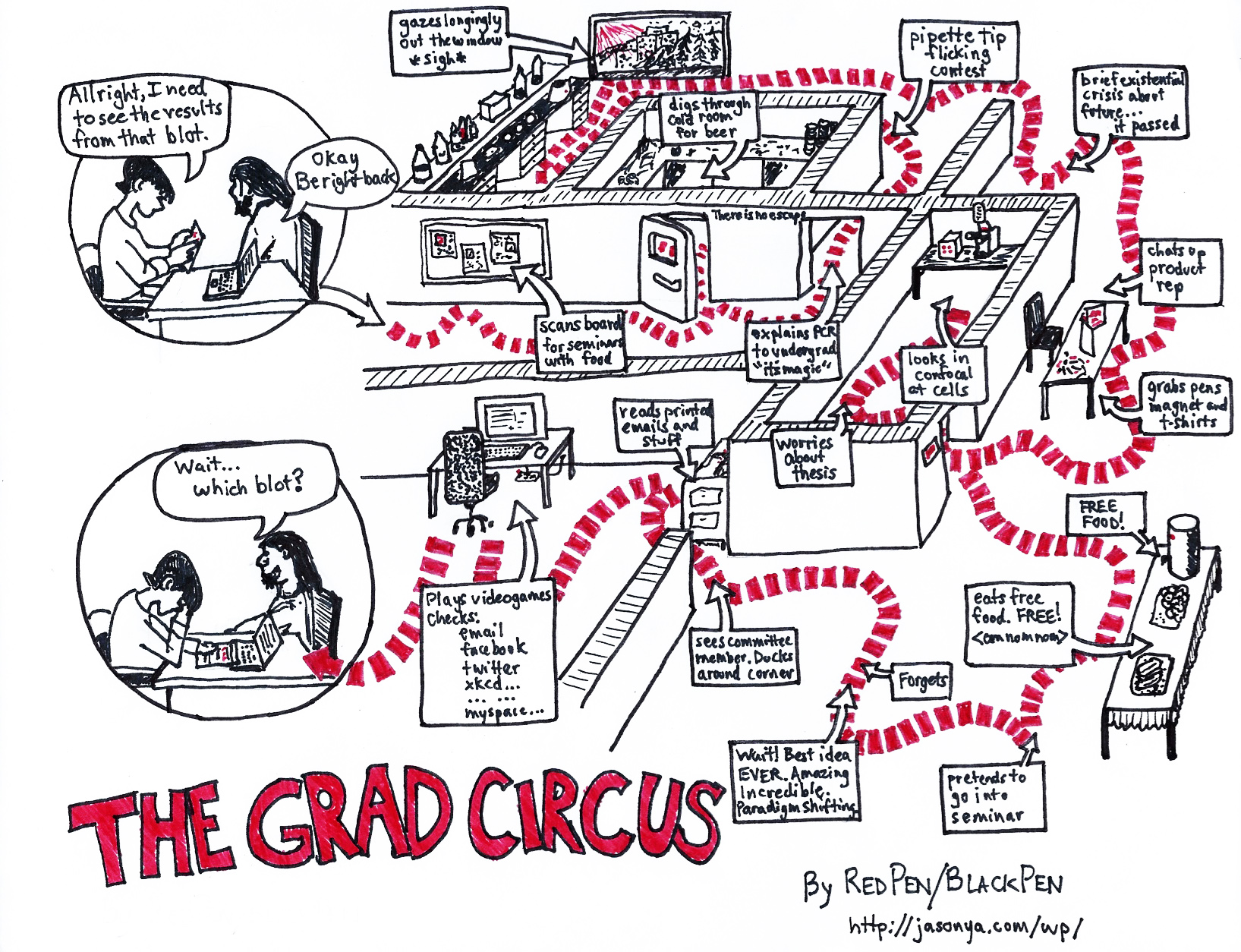 On a different note I’m pretty proud of this comic. Some of my previous ideas and concepts have been pretty complicated (see here and here). I’ve thought that I should do an outline sketch first then do a final version with more care. Both of these previous cases I started sketching and just decided to keep it as is. They’re pretty good considering. With this one I actually did sketch out an idea: 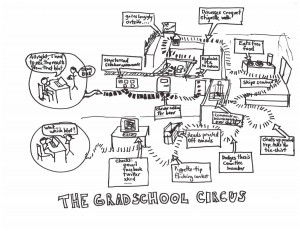 Initial pen sketch of ideas for the grad circus

then did a pencil outline of the final 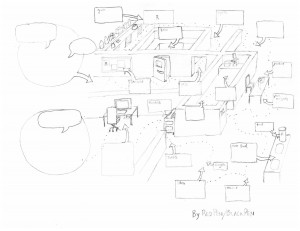 Pencil outlines for the final grad circus. Didn’t include details or text.

then traced with pen and filled in text and details.

My wife was impressed but said, “maybe for your next one you should do something about a guy that has a full time job and three kids.” Funny. This process did end up taking me about 5 hours (and a few cramped hands) of late evening and weekend time to complete giving me new respect for cartoonists, especially Bil Keane (and now Jeff Keane), whose simple comics look so ‘easy’. These maps are hard to draw!

Following on my previous post about methods to deal with the inevitable, frequent, and necessary instances of academic rejection you’ll face in your career I drew this comic to provide some helpful advice on ways to train for proposal writing. Since the review process generally takes months (well, the delay from the time of submission to the time that you find out is months- not the actual review itself) it’s good to work yourself up to this level slowly. You don’t want to sprain anything in the long haul getting to the proposal rejection stage. 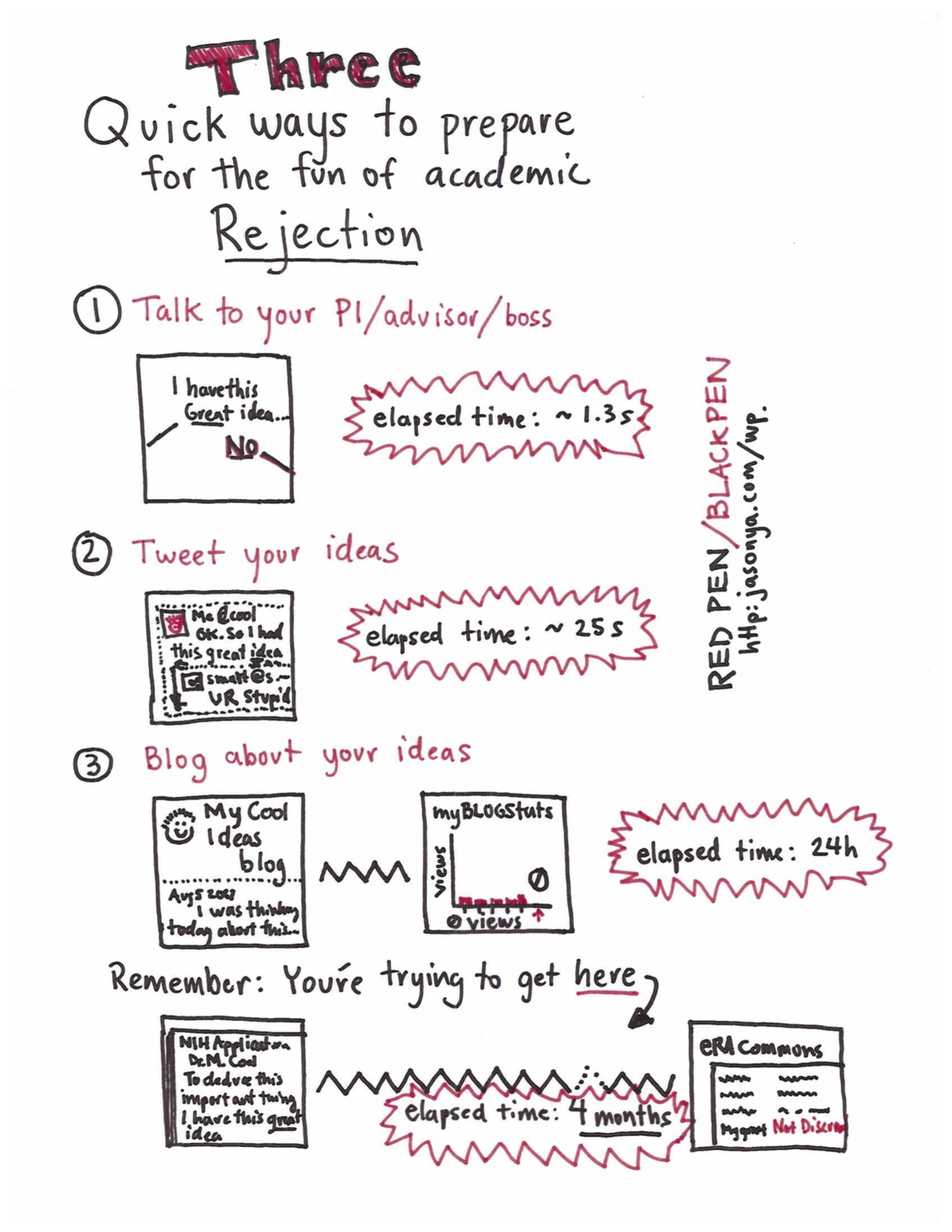 I’ve written before about the importance of replicates. Here’s my funny idea of how a scientist might try to carry out this meme of trying to get a picture of yourself holding up a sign passed around the internet to demonstrate the danger of posting stuff to kids/students/etc. And what is up with that anyway? It’s interesting and cool the first few times you see someone do it. But after that it starts to get a *little* bit old. 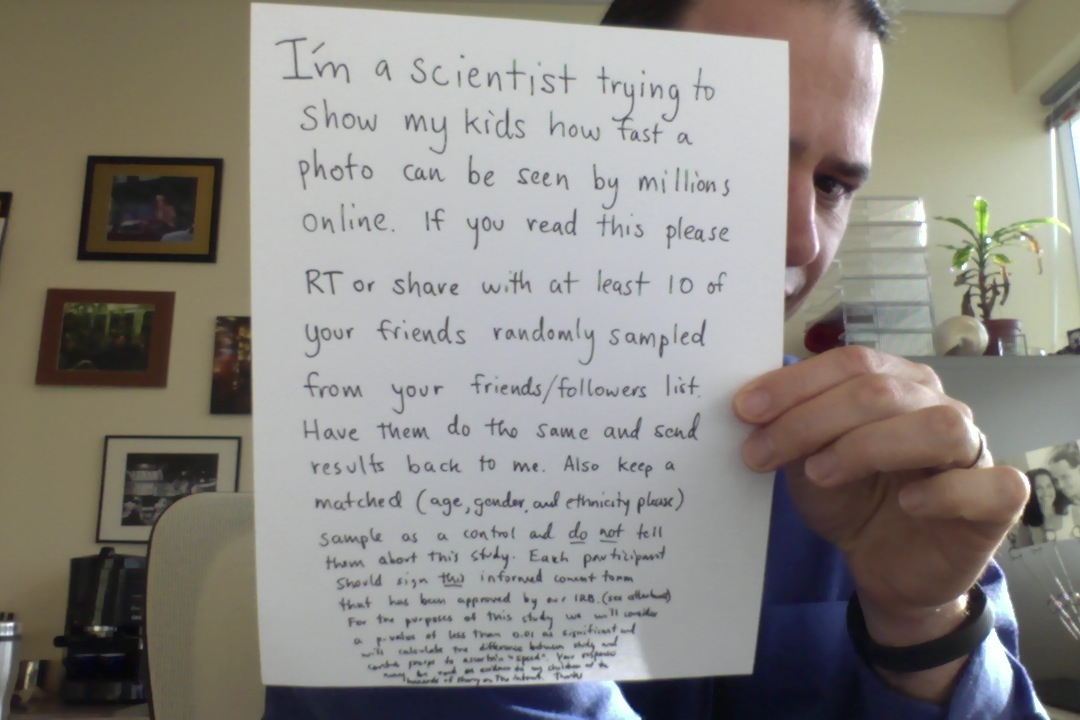 I am but a poor scientist trying to demonstrate (very confidently) a simple concept.

You know, I think the glamour publishers could really benefit from a journal to publish these kinds of results. Far less messy and then they won’t get confused with real science. Also, a bonus is that the title of the papers could be already buzzfeed-ready, no editing involved. 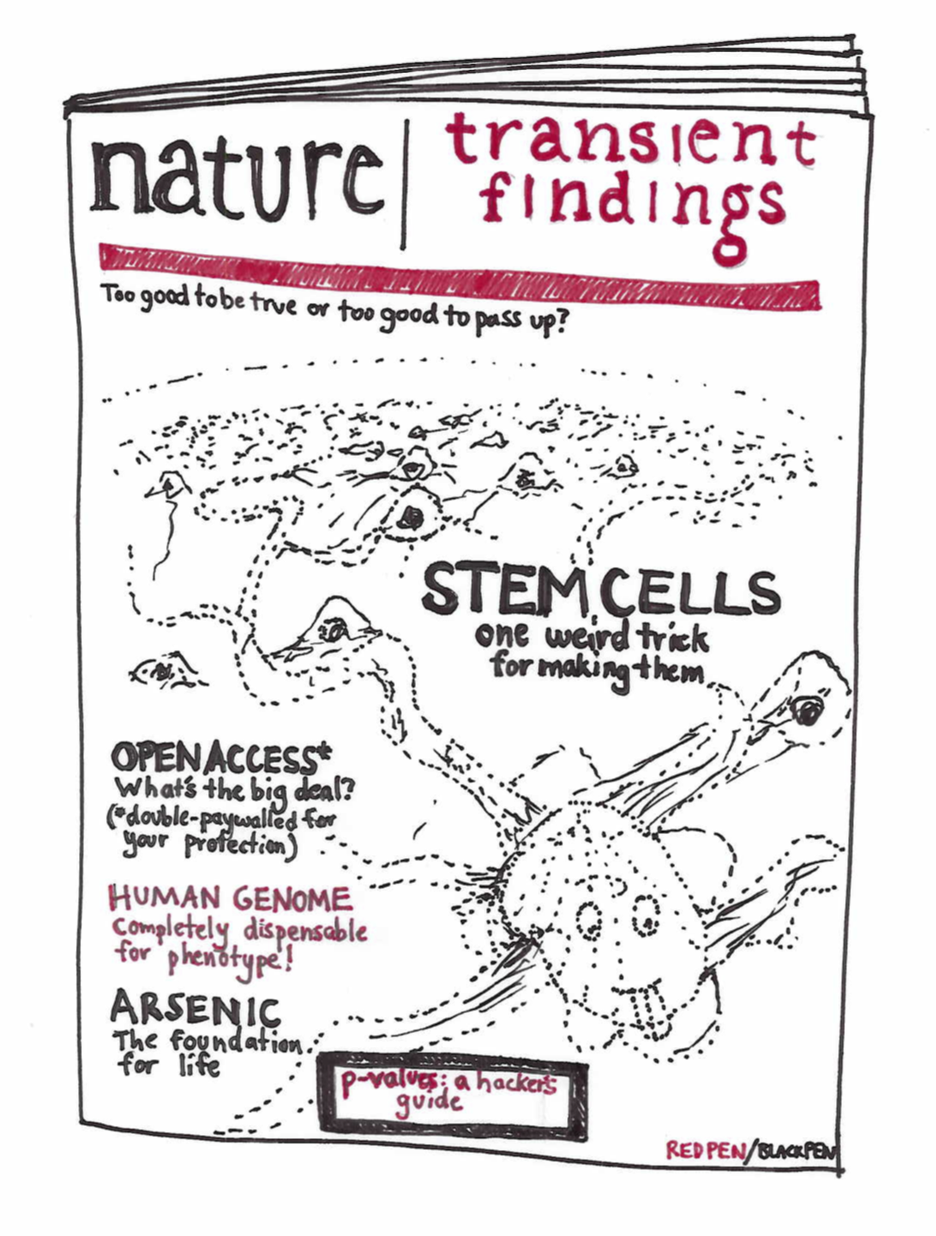 This comic was inspired by this wonderful parody, which was circulating awhile back but unfortunately I don’t know proper attribution. 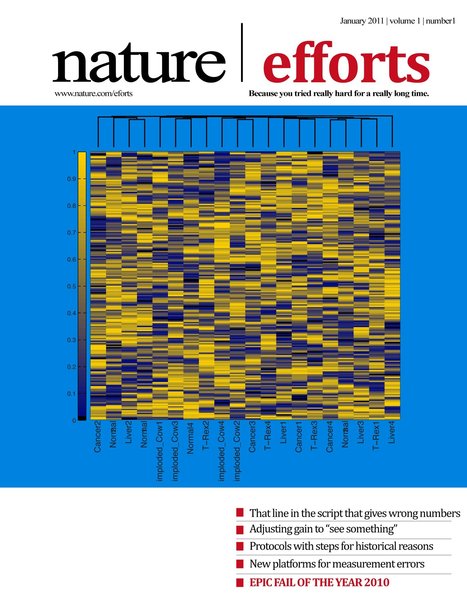 Because you tried really hard for a really long time.

For whatever reason bioinformaticians and other plot makers like to name (or re-name) plotting methods with food themes. Just saw this paper for “Sashimi plots” to represent alternative isoform expression from RNA-seq data.

That prompted me to post this from my Tumblr http://scieastereggs.tumblr.com (growing collection of funny bits in scientific publications):

Spaghetti plots? Lasagne? OK then I can do rigatoni plots

This possibly somewhat satirical paper makes the case for “lasagne plots”, following on the spaghetti plots that are popular in some fields for representing longitudinal data. Lasagne plots are presented as an alternative for large datasets though the authors state: ”To remain consistent with the Italian cuisine-themed spaghetti plot, we refer to heatmaps as ‘lasagna plots.” The remainder of the paper is a pretty straight-on discussion and demonstration of why and when these plots are better than the spaghetti plots.

Interestingly, a recent paper reimagines heatmaps as “quilt” plots (though less satirically so). This opens whole new doors in the thematic renaming of methods for plotting data.

But, in keeping with the Italian cuisine-themed spaghetti and lasagne plots: Now introducing Rigatoni plots! (no pasta was harmed in the making of this plot. Well, OK. It was harmed a little) via Spaghetti plots? Lasagne? OK then I can do rigatoni plots.

I’ve written before about how easy it is to fool yourself and some tips on how to avoid it for high-throughput data. Here is a non-exhaustive list of ways you too can join in the fun!

Want to AVOID doing this? Check out my previous post on ways to do robust data analysis and the BioStat Decision Tool from Siouxsie Wiles that will walk you through the process of choosing appropriate statistical analyses for your purposes! Yes, it is JUST THAT EASY!

Feel free to add to this list in the comments. I’m sure there’s a whole gold mine out there. Never a shortage of ways to fool yourself.

I’m currently sitting on a plane heading to Washington DC to give a presentation for the renewal of a large-ish project I’ve recently become involved with. This is significant in that, if it’s renewed, the project will give me additional funding through a critical time. Things are

dire in research funding right now. For a digest of how dire see the following link. If you’re a research scientist who doesn’t know that I either pity you (because you’re so out of touch) or envy you (because you’re in a position where you just don’t have to worry). But I’m an optimist and optimists like to find the silver
lining of everything, or in this case the green lining (green as in cha-ching, $$$). So here are a collection of thoughts on why this whole sequester, with it’s accompanying 10% reduction in NIH funding, and corresponding decreases in other major funding agencies, just might be a good thing.

Feel free to chime in with your optimistic views for research funding. I, for one, say bring on the sequester. I’m ready. I’m not afraid. To quote Major Kong: “Yeeeee-haw. YEEEEEEEEEEEEE-HAAWWWWWWW!!!!”

[2/26/13 9PM Updated RE Ron’s catch below. Yes the first bomb riding clip I had was dubbed in German. That’s what I get for posting from the plane.]