The label of “scientist” is usually assigned to a particular type of person. One who is highly educated and generally paid to do science as a profession. While this is not incorrect (these people are generally scientists)- it is not inclusive. Studies have highlighted that very young children use something very like the scientific method to discover things about their environment, the people they interact with, and how the world works.

A group of middle schoolers from New York were listed as co-authors on a PLoS One publication about elephant behavior last spring. This was featured in a New York Times article about it that mentions it as one of the first times that a teenagers have been listed as co-authors on a scientific study. This is really a big accomplishment for them- and it’s great to see them get recognition and respect from their coauthors, the established scientists. The paper itself doesn’t really highlight the role that the teenagers played in the experiment however. This is really written as more of a straight-on scientific paper.

However, this isn’t the first publication like this. In 2010 a paper on behavior in bees

was published in Biology Letters that includes as it’s first author “P.S. Blackawton”, where the “P.S.” stands for “Public School”. This paper is really cool because the entire process was guided by established scientists, but was thought of, executed by, and largely written by elementary school children, aged 8-10. The abstract for the paper gives a good overview of how, and why, the study was organized as such.

This is science: the process of playing with rules that enables one to reveal previously unseen patterns of relationships that extend our collective understanding of nature and human nature.

What a great thing not to forget as an “established scientist”.

Here’s an excerpt from the Discussion section that highlights what a refreshingly delightful read this paper is:

This experiment is important, because, as far as we know, no one in history (including adults) has done this experiment before. It tells us that bees can learn to solve puzzles (and if we are lucky we will be able to get them to do Sudoku in a couple of years’ time).

It is really important to remember that the label of “scientist” does not just apply to those with PhDs (or on their way), with white coats, doing experiments in laboratories. Scientists are those who follow the scientific method, intentionally or not, to discover things about the world around them. And non-traditional scientists can bring a whole new perspective to challenging problems.

I just realized that this year marks the 20 year anniversary of my first scientific publication. Wow! That makes me about <mumble mumble> years old. But it’s a good point to reflect on my scientific genesis. The paper (I was middle author) was on biochemical characterization of HIV-1 matrix (MA) protein function, and I contributed by doing some of the work 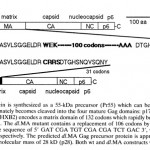 including showing that MA could be deleted and HIV would still be infectious. We also showed that the deletion-MA HIV packaged the envelope protein differently than the wild-type (naturally occurring) virus. According to Google Scholar the paper has been cited 89 times (here’s a post on how my other papers have fared) and to commemorate its 20th anniversary Journal of Virology has made it available for free on their website. (OK- maybe they just make things available for free after they get really old)

Here’s a timeline for my scientific genesis (the organized, formal part of it- I’ve always been a scientist at heart):