I’ve been fascinated with the idea of investment, and how it can color your thoughts, feelings, and opinions about something. Not the monetary sense of the word (though probably that too) but the emotional and intellectual sense of the word. If you’ve ever been in a bad relationship you might have fallen prey to this reasoning- “I’m in this relationship and I’m not getting out because reasons so admitting that’s it’s absolutely terrible for me is unthinkable so I’m going to pretend like it’s not and I’m going to believe that it’s not and I’m going to tell everyone that I’m doing great”. I really believe this can be a motivating factor for a big chunk of human behavior.

And it’s certainly a problem in science. When you become too invested in an idea or an approach or a tool- that is, you’ve spent a considerable amount of time researching or promoting it- it can be very difficult to distance yourself from that thing and admit that you might have it wrong. That would be unthinkable.

Sometimes this investment pitfall is contagious. If you’re on a project working together with others for common goals the problem of investment can become more complicated. That is, if I’ve said something, and some amount of group effort has been put into this idea, but it turns out I was wrong about it, it can be difficult to raise that to the rest of the group. Though, I note, that it is really imperative that it is raised. This can become more difficult if the ideas or preliminary results you’ve put forward become part of the project- through presentations made by others or through further investment of project resources to follow up on these leads.

I think this sometimes happens when you’re writing an early draft of a document- though the effect can be more subtle here. If you write words down and put out ideas that are generally sound and on-point it can be hard for you, or others who may edit the paper after you, to erase these. More importantly a first draft, no matter how preliminary or draft-y, can establish an organization that can be hard to break. Clearly if there are parts that really don’t work, or don’t fit, or aren’t true, they can be removed fairly easily. The bigger problems lie in those parts that are *pretty good*. I’ve looked back at my own preliminary drafts and realized (after a whole lot of work trying to get things to fit) that the initial overall organization was somehow wrong- and that I really need to rip it all apart and start over, at least in terms of the organization. I’ve also seen this in other people’s work, where something just doesn’t seem right about a paper, but I really can’t place my finger on what- at least not without a bunch of effort.

Does this mean that you should very carefully plan out your preliminary drafts? Not at all. That’s essentially the route to complete gridlock and non-productivity. Rather, you should be aware of this problem and be willing to be flexible. Realize that what you put down on the paper for the first draft (or early versions of analysis) is subject to change- and make others you are working with aware of this explicitly (simply labeling something as “preliminary analysis” or “rough draft” isn’t explicit enough). And don’t be afraid to back away from it if it’s not working out. It’s much better if that happens earlier in the process than later- that is, it’s better to completely tear down a final draft of a paper than to have reviewers completely miss the point of what you’re trying to say after you’ve submitted it. 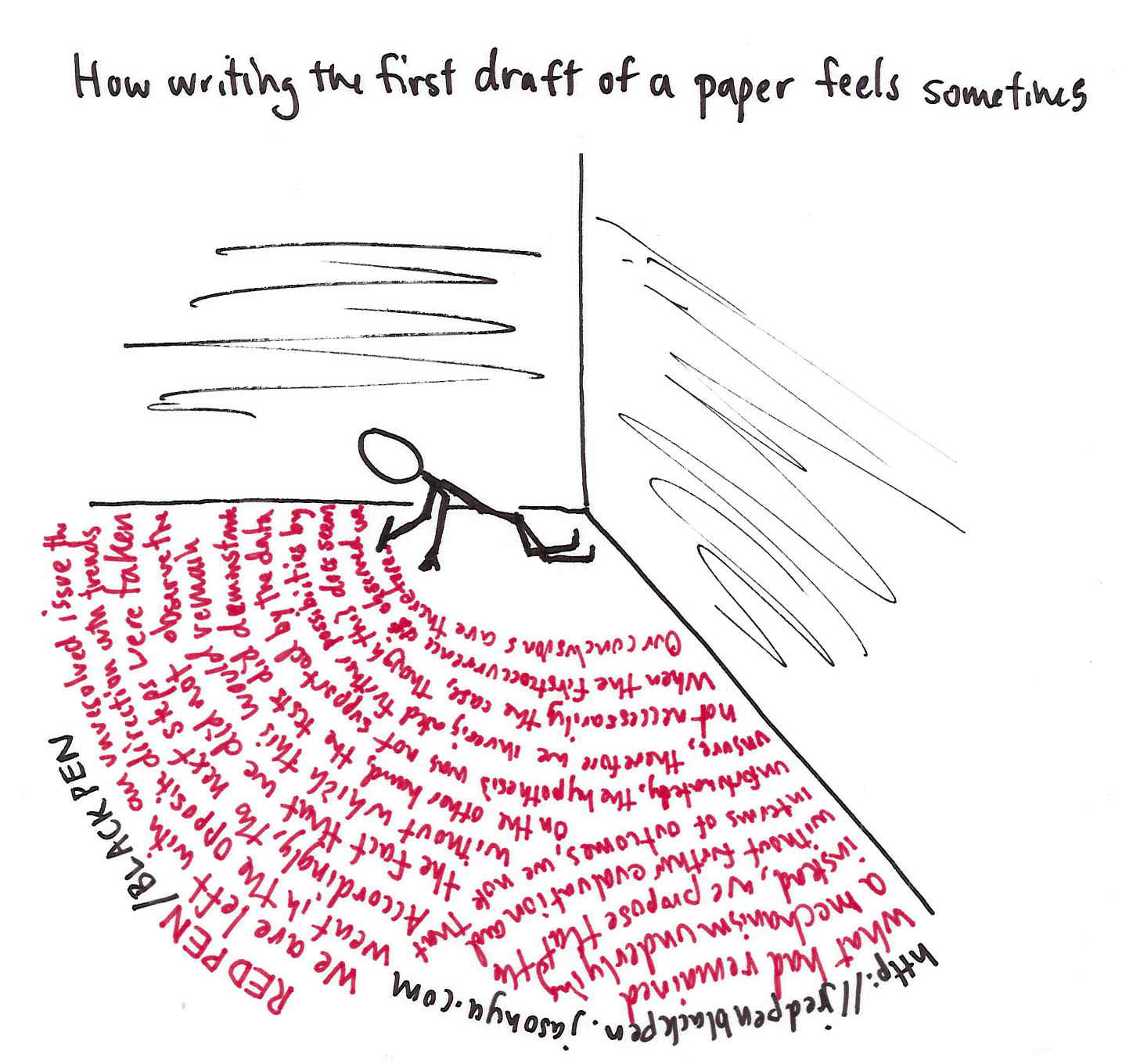