What about me? I’m a dad, married to a wonderful woman with three lovely kids. I’m a computational biologist by day, which means that I do biology using computers. It’s a great gig, they actually pay me to do this stuff (is what I think on a good day). Here’s a link to my work-related about page [placeholder].

I enjoy drinking beer, playing guitar, taking photos, biking (a recent activity), and what else?

You may have noticed I haven’t posted anything here in awhile. Over a year actually. The main thrust of my commentary, it seems, has been diverted to comic form (see http://redpenblackpen.tumblr.com or my Twitter account). My comic-drawing side-gig has taken off- well, lifted off the ground anyway. Today I have an essay in Science (THE Science) on the balance between my comic-drawing identity and my science identity. The piece is pretty light-hearted. I wanted to include a disclaimer about how this is very much a privileged issue to be dealing with in my career- it’s really only positive and I know many others are dealing with much weightier and life-impacting issues with identity. But that disclaimer didn’t make it in the final piece- which is why I’m posting it here.

But this post is about a particular piece of work- my comic-only poster. It all started on a small island in the Pacific Ocean…

Well it did. I was at the Pacific Symposium on Biocomputing and discovered an interesting thing had happened. When a colleague introduced me by name at a table for lunch I was greeted with polite nods. However, she then followed with, “You know – RedPenBlackPen? The comic?” That elicited a different response. “Oh, cool!” “You do that?” “Wow- I’ve got a comic of yours in my lab!” My identity as a scientist was suddenly being eclipsed by my identity as a comic artist. This was interesting, a bit confusing, and I was ambivalent enough about it that I ended up writing the essay. I got to the essay through the poster. And I got to the poster through PSB.

At PSB I was introduced to Philip Payne (WUSTL). He challenged me to “do a poster completely in comic form”- and gave me the incentive of having a poster spot at a session he was organizing at the AMIA Joint Summits on Translational Science.

So I did it. The session was the DataEd Hackathon- a competition to develop curricula for education about big data and data science. I first had to come up with an idea for the poster. What kind of theme could walk the line between being visually appealing and fun and being actually useful for the topic I was presenting? I kicked around a few ideas but the idea of a theme park was one that kept sticking. Partly it’s because I really like maps and the map metaphor to visualize things (take a look here and here for example). And partly it’s because I immediately had ideas for metaphors for some individual rides.

When I got it finished and printed out a lot of people thought that I had drawn it as one big thing on a big piece of poster-sized paper. I didn’t. I considered doing that first and quickly realized that every time I wanted to make a small change in the poster I’d have to draw it all over again (or apply a bucket of White Out). So I decided to composite it- but didn’t really have any experience doing so.

I initially did sketch of the overall idea to try to get some ideas down. 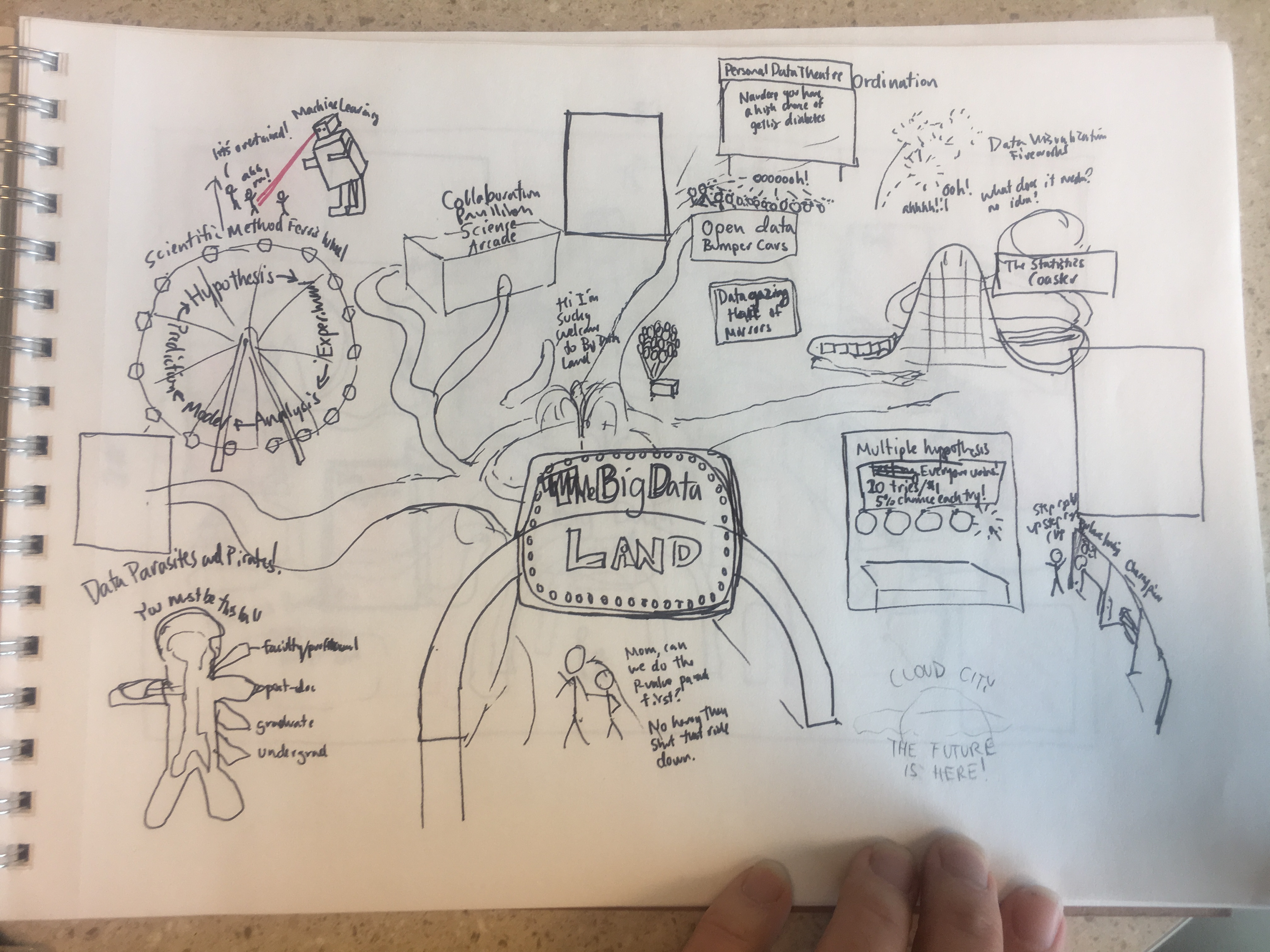 I then did a second sketch with a bunch of the elements I was going to put in the poster. I blocked sections off by approximate page sizes that I could draw on. 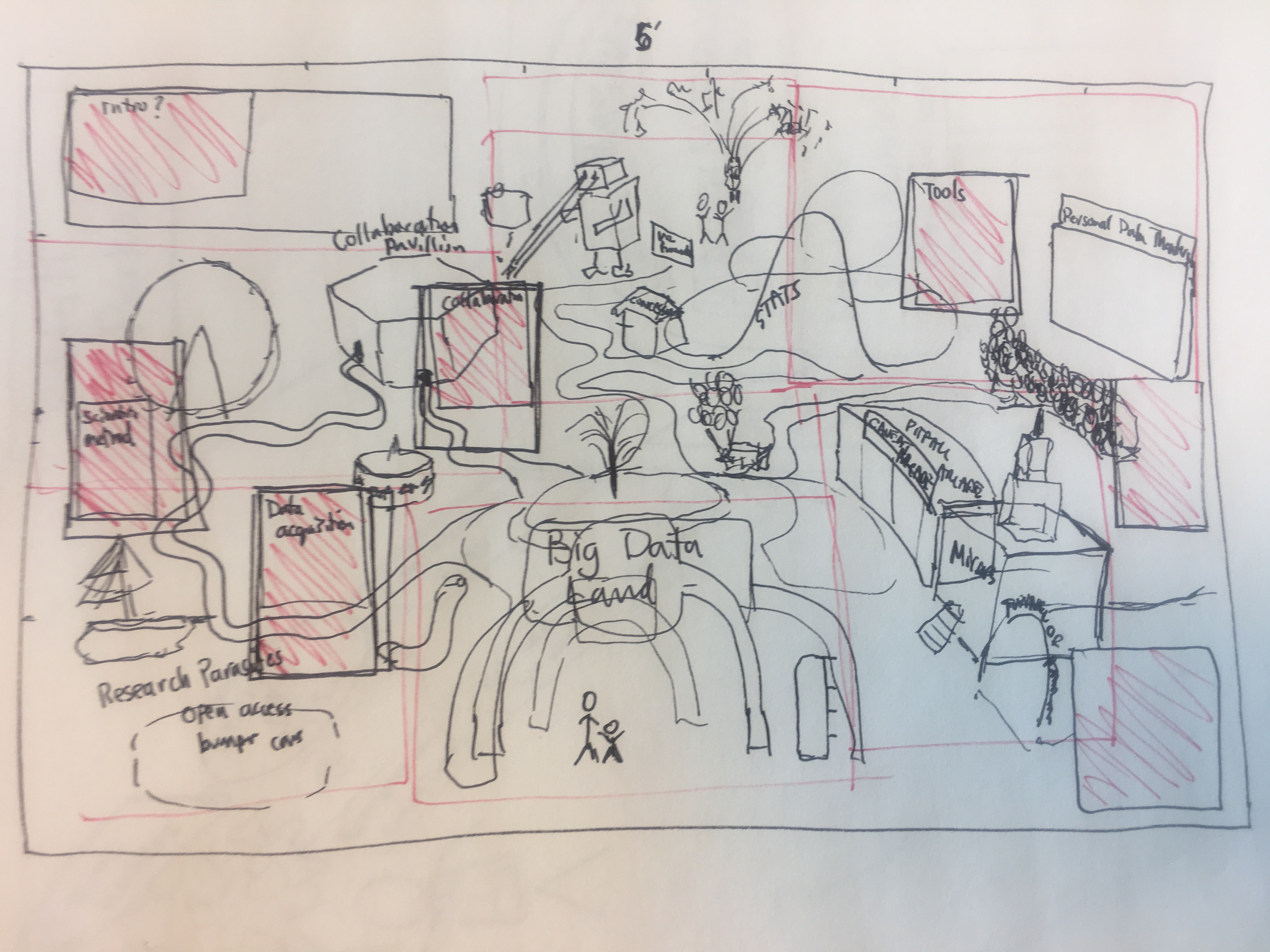 Then I started drawing the individual pieces. The rides first, then some of the detail bits, then the connecting paths, then finally the panels that would contain the text content. Overall I drew about 30 different elements covering about 12 drawing pages. When I had these scanned in I started assembling the pieces. Initially I used Adobe Illustrator- but found that I wanted to do too many image corrections and manipulations to get everything working together- so I switched to Photoshop. In Photoshop I made extensive use of layers and groups of layers. The editing I did was mainly clean-up (removal of pencil lines, e.g.), transparency (erasing sections of white that were 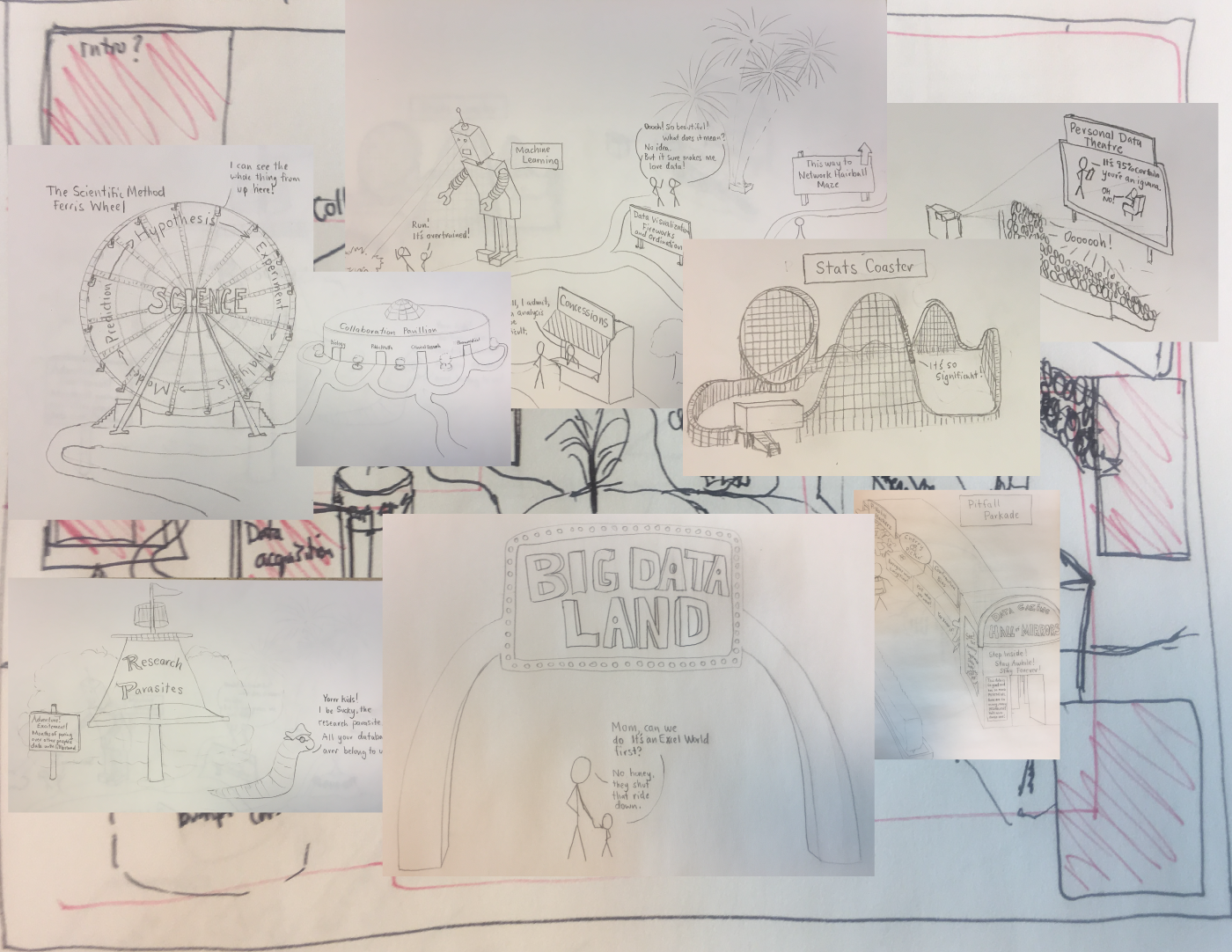 covering other features), and moving elements around. The overall layout changed a couple of times. For those changes I had to redraw the background pathways that connected things. This was also an issue of continuity. I didn’t have paper big enough to draw the actual connecting paths. And wouldn’t have a scanner big enough to capture it. So I ended up printing out sections of the composite poster that were page sized, setting a blank sheet of paper over the printout, and drawing the connecting roads, then scanning them back in and placing them. It was more involved than I’d envisioned, but it was the only approach that really looked good. 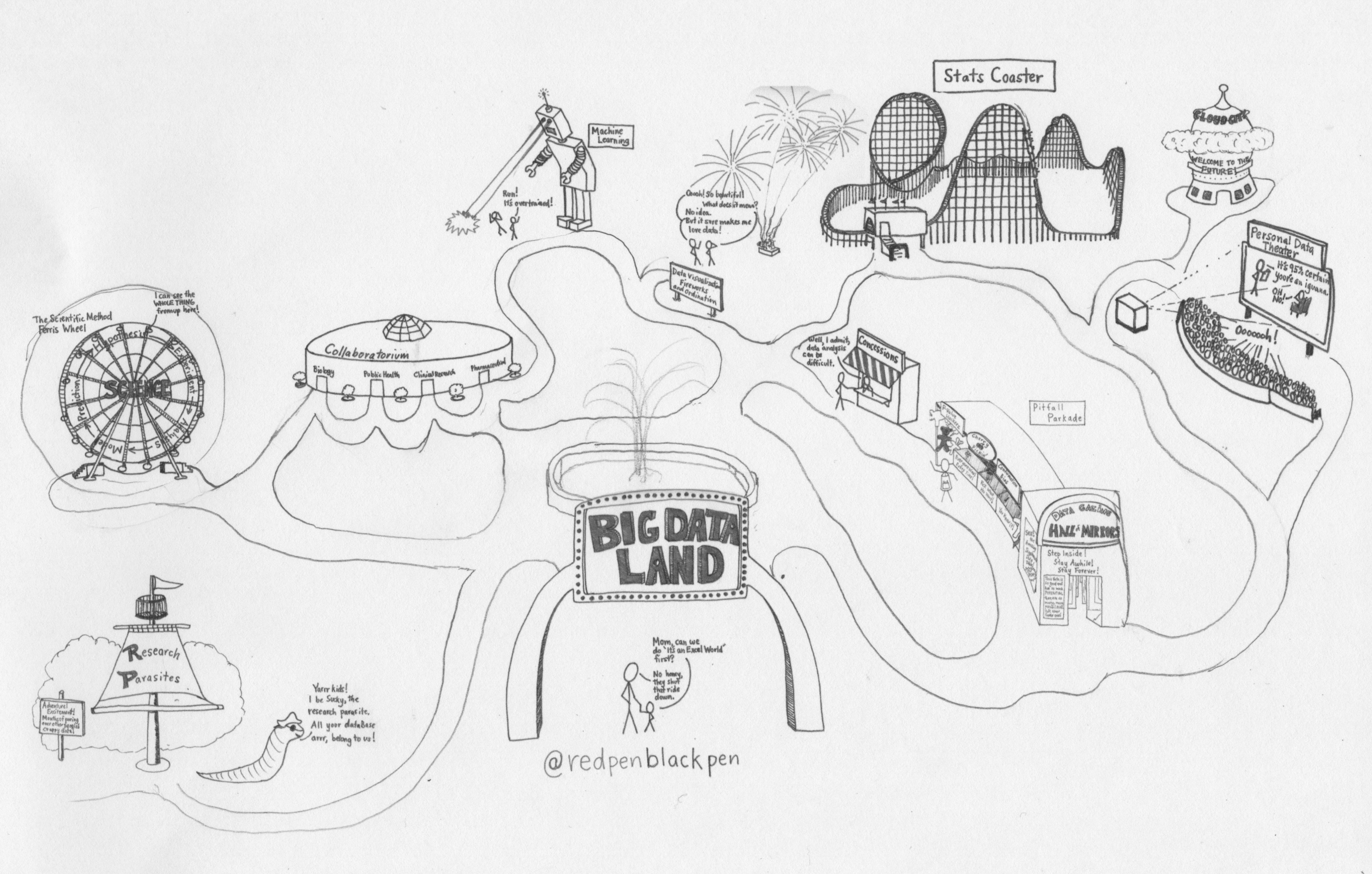 The content- the text panels- actually came last. I put these together based on broad topics of data education, and they basically fit a standard poster flow- introduction, various components, summary.

At the end of this ~week long process I had a Photoshop file that was over 1.4 Gb in size with over 30 layers. I wasn’t really sure about it until I got the printed version (picked up on my way to the airport) and spread it out. It turned out great. I was really happy – but I still didn’t know how it would be received at the conference.

As soon as I put up the poster at the conference- in the central area outside the rooms where sessions were taking place- I realized that something was different about this poster experience. I have presented posters at large conferences that have had only a handful of interested people the whole time the poster was up. Within a couple hours of putting this poster up (a day before the actual poster session itself was scheduled) I had talked to 5-10 different people. The conversations generally started with me giving an overview of my ideas about the poster and about data education (not my area of focus as a researcher- but one that I’ve got a lot of thoughts about)- but then would range in to other topics. Sometimes the talk would turn to what my research was about- sometimes about how science is communicated to the public and to other scientists. Over the three days the poster was up I probably interacted with 5 times more people than I would if I’d been presenting a traditional poster.

After this experience there was no doubt that this interesting and engaging format had attracted a lot of attention and had generated a lot of potentially productive interactions for me. I’ve since presented it at a Bring Your Kids To Work Day event at my work – the kids and parents were all interested and excited by it- and it’s been up in my building for people to look at.

However, there are a few questions that still linger for me. Is this just a stunt? That is, the comic thing is attractive and interesting- but does it really add to the communication portion? Are there places on the poster where I was able to much more effectively communicate my ideas through comics than I would through words and traditional graphics? I certainly was able to get people to listen- and I believe that the comic format really enhanced the experience. I’m now wondering how I might incorporate this kind of approach to present research-based results as posters. This seems to present a set of unique challenges. I’ve also started to think about ways to incorporate comics in to other kinds of presentations- talks for one. Finally I’m considering using comics to approach yet other areas- grant proposals for one- but haven’t yet decided whether this would be pure brilliance or pure folly. 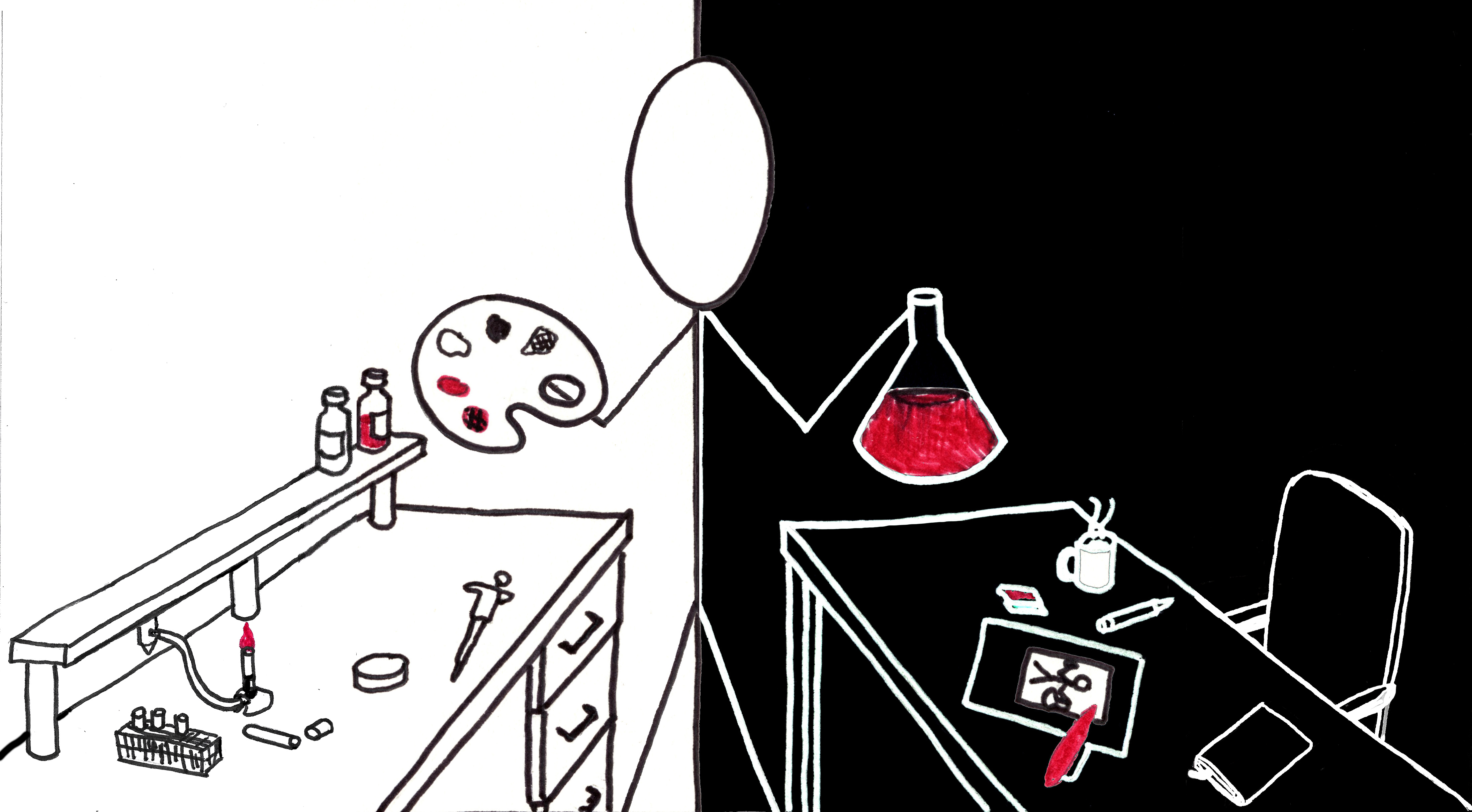