I came up with an interesting idea today based on someone’s joke at a meeting. I’m paraphrasing here but the joke was “let’s just get all the proteins Facebook accounts and let their graph algorithms sort everything out”. Which isn’t as nutty as it sounds- at least using some of FBs algorithms, if they’re available, to figure out interesting biology from 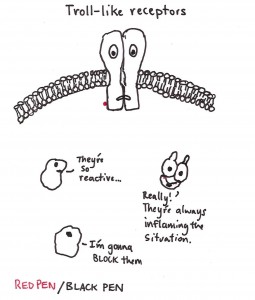 The Cellular Social Network Can be a tough place

protein networks. But it got me thinking about social media and computational biology.

Scientists use Twitter for a lot of different purposes. One of these is to keep abreast of the scientific literature. This is generally done by following other scientists in disciplines that are relevant to your work, journals and preprint archives that post their newest papers as they’re published, and other aggregators like professional societies and special interest groups.

Many biologists have broad interests, but even journals for your sub-sub-sub field publish papers that you might not be that interested in. Many biologists also have specific genes, proteins, complexes, or pathways that are of interest to them.

My thought was simple. Spawn a bunch of Tweetbots (each with their own Twitter account) that would be tied to a specific gene/protein, complex, or pathway. These Tweetbots would search PubMed (and possibly other sources) and post links to ‘relevant’ new publications – probably simply containing the name of the protein or an alias. I think that you could probably set some kind of popularity bar for actually having a Tweetbot (e.g. BRCA1 would certainly have one, but a protein like SLC10A4 might not).

Sure there are other ways you can do this- for example you can set up automatic notifications on PubMed that email you new publications with keywords- and there might already be specific apps that try to do something like this- but they’re not Twitter. One potential roadblock would be the process of opening so many Twitter accounts- which I’m thinking you can’t do automatically (but don’t know that for sure). To make it useful you’d probably have to start out with at least 1000 of them, maybe more, but wouldn’t need to do all proteins (!) or even all ~30K human proteins.

I’m interested in getting feedback about this idea. I’m not likely to implement it myself (though could probably)- but would other biologists see this as useful? Interesting? Could you see any other applications or twists to make it better?